“If we were meant to stay in one place, we’d have roots instead of feet” – Rachel Wolchin

Hiring a car in Europe was a decision that didn’t come lightly. We had been told by everyone that it was a bad idea for 3 main reasons.

1. The Spanish are crazy drivers

2. You don’t know where you are going and signs are in another language

3. Driving a car on the opposite side is stressful

In summary, it was in fact all of the above. The drivers are crazy, there are no speed limits, the signage is poor, English wasn’t common, driving on the ‘wrong’ side of the road took concentration and above all we didn’t really have a plan. Do I regret it? Absolutely not. I have never felt more free to explore in my life.

After meeting in Barcelona, Laura and I traveled down to Valencia by train. We stayed in Valencia for a few days and realised that trains and buses weren’t that easy further south. We are beach goers at heart and wanted the freedom to explore the coastline at our own free will. So we rocked up at a street in the city to find the best deal to rent a car. After getting 5 or more quotes, we ended up going with Europcar and it wasn’t cheap. It cost 240 euros to take the car for 4 days and drop it to a city further south. It would’ve been cheaper to take it back to Valencia but that wasn’t the point, so we forked out the money convincing ourselves that it was worth it. 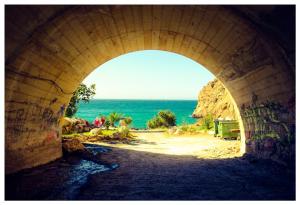 Everything is funnier in hindsight. Which makes writing about it, even better. When we first got the car, our primary mission was to make it out of the city – in one piece. We must have done about 3 loops on the same road before understanding how to get out. Laura was driving and I was navigating. It certainly tested our friendship. We had no GPS or wifi. We are explorers we told ourselves. We could surely figure it out! All I had was a single, pathetic map which had no road names other than the highways and poor Laura was trying to work out which road rules needed to be followed and which ones didn’t. So we were both stressed. Finally, we made it out of the city and drove down the freeway for half an hour to find the nearest beach. We were so glad to be out of the chaos! However, it was just our luck, I told Laura to take a turn off which ultimately swung us around and took us all the way back to the centre of Valencia city. It was going to be a long day.

Hours later, we made it to our first stop – El Saler beach. It was beautiful and although it had taken us all day to get 12km, we were finally relaxed. We sat down at a peaceful beachside cafe and ate paella. We got out the map and realised we had a lot of driving to do considering we pretty much hadn’t left Valencia yet. And now we had only 3 days to get to Algeciras (which was 1000km away!) We finished the paella pretty quickly and decided to cover as much ground as we could before finding a place to sleep. We had some pretty hilarious moments trying to work out how to work different things in the car. Sometimes when Laura wanted to turn the blinkers on, we ended up with detergent on our windscreen which made us both laugh hysterically every time. We would stop, eat, stretch our legs and take in the views every so often. We made it only 100km further south before realising it was getting late and we had no idea where we were. We pulled into a McDonalds to get wifi and found the closest hostel. We found ONE in the whole area . We drove there but the owner had closed down the business for the night for a private party and all her family and friends were staying over. She felt sorry for us. We looked exhausted and kinda begged her for a floor space, so in the end she let us stay in a room. Yay! We learnt our lesson not to leave it too late next time. 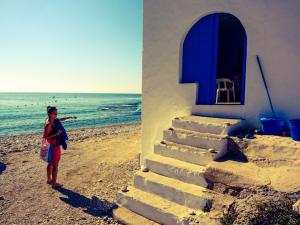 It wasn’t until we woke up and looked outside that we knew where we were. We had stayed in Javea – actually a beautiful little seaside town with ancient buildings.

TIP: Stop at Denia for an afternoon and soak up the small bar scene!

We didn’t have too much time to explore Javea. We got up early and drove straight to Barcatta Beach for an early morning swim. Although difficult to reach (signage was poor) it was totally worth it. Every time you see a local, stop and ask if your headed in the right direction. It helps greatly.

And what a day! We drove through the enchanting town of Benidorm, went down a one way street in Alicante, found a marvellous cliffside drive, visited Torrevieja beach full of colourful umbrellas, stopped for local gelato and churros, explored Aguilas beach and got lost in Majacar town. The scenic drives between each area blew our minds. It was a magnificent coastline and it took our breath away. The car smelt of sunscreen and wet hair which reminded us of summer at home. Having the car was the best. We could spread out our luggage, leave our shoes in the back and hang our wet bikinis from the grab handles. Most of the time we could drive straight up and park on the sand, get out, swim around topless, jump back in the car and sing along to the radio until we got hot again and needed another swim. We would simply pull off the highway and find the closest beach we could. It was sheer freedom and we loved it.

In summary, we got carried away and didn’t learn our lesson. We got stuck again trying to find accommodation and this time, were almost prepared to sleep in the car, until finally we spotted a small pension hotel called Bahia on the beach in a town called Castello De Ferro. Lucky we had a private room and not a dorm because we were so insanely sunburnt that we couldn’t sleep in clothes. We lathered ourselves up in sunscreen and ditched the bras for the rest of the trip! 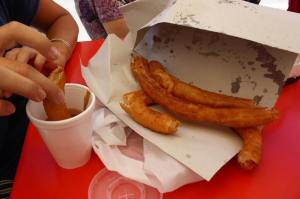 We woke up early again and wandered down to a tiny food cart selling fresh churros with homemade chocolate. It was Sunday! And churros are a traditional Spanish Sunday brunch. We sat outside in the sun and lazily ate the chocolate goodness. We got 10 huge churros for less than 1 euro and we couldn’t finish them all. We were too full!

We stopped at Playa Del Riyana, Charchura Calahondra and Playa Del Salobreno all before the afternoon. All the beaches in this area are stunning. If you have time, I would recommend just driving around to find one that suits what your looking for. Some are quiet and deserted, others are busy and full of beachside cafes. When the sun started to set, we went straight inland towards Granada.

We were getting better at navigating the car through new towns by this stage. Only 6 laps of the old town compared to the usual 10. The tiny laneways seemed impossible to drive through but we simply followed what everyone else was doing and finally managed to park it somewhere out of trouble. As soon as we had found a hostel, we dumped our bags and headed straight out. We went straight to the Arabic Quarter and explored the cobblestone streets filled with small tea houses and Middle Eastern food stalls. After spending 10 minutes at a viewpoint, we agreed we needed a drink. We certainly deserved it. We spent the entire evening bar hopping from place to place ordering drinks and eating tapas.

Tapas, in the sense of small portions of food, is common throughout Spain. In the North part of Spain like the Basque region, ‘tapas’ is known as pintxos which is typically small servings of food laid out on a bar and you simply pay for what you eat. But the really special ‘tapas cities’ like Granada, are the ones where the tapas comes with every drink and is completely for free.

We quickly learnt that bar hopping isn’t really the best way to do it here. Typically when you order your first drink, you get a small plate of tapas. It is generally cheaply made food such as fries or dip. However the more money you spend in a bar, and the more drinks you order – the better tapas is brought out to you as the night goes on. So we were better off staying in a bar long enough to get the good stuff. We parked ourselves at Los Diamantes for the remainder of the evening and were served fresh sardines, mini sliders, fresh seafood and a whole range of tapas dishes. It was the best! It became exciting as we wondered what dish we would get next and we soon forgot how much we were drinking in the anticipation of the next plate of food. We were extremely intoxicated after a few hours. We met a group of fellow travellers and headed out for the evening and didn’t return home until early hours.

TIP: Stay at one bar longer to taste the better tapas plates! 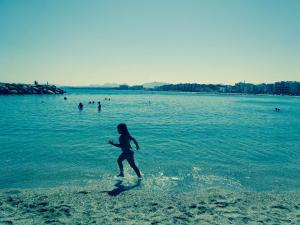 We woke up with our clothes on that we were wearing from the night before. Although incredibly hungover, we still managed to get up early and continue the drive. We desperately needed a swim to clear the red wine seeping from our pores.

We bypassed Malaga simply to avoid the hassle of a city and opted for Playa Bajondillo which I had read had beautiful sand and cool beach bars. It wasn’t anything special so continued on stopping at various beaches until we found paradise – Playa El Cristo. The sand looked like it was bleached white, the water was crystal clear and they had a luxurious lounge setting on the sand for lunchtime drinks. If you choose to opt for the budget option and stay on the sand – bring an umbrella, there is no shade elsewhere! We lazed there for hours soaking up the sun and then continued on to Algeciras where the car was due back. 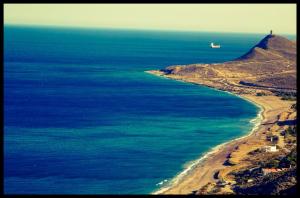 Dropping the car off was an adventure in itself. We needed to fill up the tank before returning it, which we expected. However, it took us so long to find the office that we had used an 8th of the petrol that we just filled up! So we were charged 25 euros for the extra fuel! So frustrating. We paid it simply so we could leave and not have to get back in the car and find a gas station. We were done with the car, It was amazing but stressful and we were ready to be backpackers again. Algeciras was awful. Rubbish was flying everywhere, the town was deserted and had gangsters on every corner yelling out things in Spanish. We literally walked straight to the bus station from the Europcar office and caught the next bus south to Tarifa.

We instantly fell in love with Tarifa and spent 2 days eating, drinking, shopping, lazing on the beach and reading before making our way across to Morocco.

So, in summary, would I recommend a road trip in Spain?

Absolutely. Allow plenty of time. You never know what place will steal your heart.